With respect to velocity-time plot, the following points have to be kept in mind to extract maximum information.

so the slope of the tangent drawn to velocity-time plot gives acceleration. If the v-t plot is a straight line, the acceleration is constant. 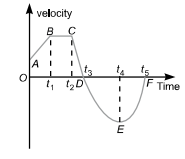 t 1 < t < t 2 is positive and constant and acceleration is zero.

t 2 < t < t 3 is positive and decreasing with varying acceleration along -ve x-direction. Hereafter seeing the curve we can say that value of

t 4 < t < t 5 is ve and decreasing in magnitude as acceleration is positive, whose magnitude is increasing. 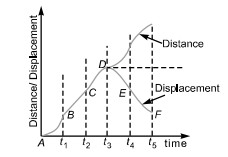 Here, we have assumed that the Area of OABCD > Area of DEF Note carefully the slope of the drawn plot at t = 0.

The exact variation of acceleration for t 2 - t 4 and from t 4 – t 5 can’t be known from velocity-time plot unless we know the equation for the v-t plot, that’s why we have drawn all three possibilities.