Consider a particle moving in XY plane as shown in figure: 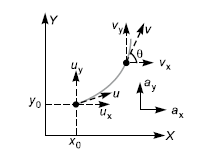 Let initial position and initial velocity of particle are (x0, y0) and

respectively, assume the acceleration of the particle is (uxî + uyĵ) then the equation of motion for X and Y direction could be written as:

Here, we have considered that ax and ay to be constants. Whether information you desire like the position of a particle at any instant, the equation of path followed by a particle, angle made by velocity vector with X-axis at any instant, the time is taken by the particle to reach a particular point etc could be obtained by using these equations. The resultant motion of particle in X-Y plane could be described by equations

An important application of 2D kinetics theory is the projectile motion. If we project a particle obliquely from the surface of the earth or near to surface of the earth, then its motion is said to be projectile motion. The path followed by a projectile is called its trajectory, which is greatly affected by air resistance, which makes an exact analysis of the motion extremely complex. In fact, the exact motion of a projectile in itself is a separate science, however, we neglect (important) effects of air resistance and assume that the motion is taking place in empty space. In addition, we assume the acceleration due to gravity to be constant. 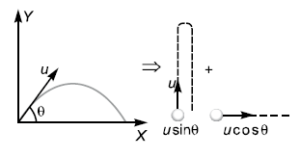 A projectile motion can be considered as two perpendicular 1D motions, one along the horizontal and other along the vertical. Considering point of projection as origin and +ve X and -ve

Y-axis as shown, the equation of motion of X and Y axes could be written as

Here, acceleration along X-axis is zero and hence horizontal component of velocity remains constant, while along Y-axis it is just like a particle projected in vertical upwards direction with initial velocity u sinθ

Some important points for the plane to plane projectile motion as discussed above are mentioned below:
♦Equation of trajectory is,

where R is the range of the projectile.

♦Range is maximum for given projected speed at θ = 45°and is same for complimentary angles.

♦Speed is minimum at maximum height, the vertical component of velocity is zero at the point.

♦The path of a projectile is parabolic in nature.
If the particle is projected from some height instead of from earth’s surface, then also you can apply the same concepts. In this situation, it is better to take the point of projection as the origin and initial direction of motion as +ve X and Y-axis.

♦ if a particle is projected on an inclined plane as shown, then rangeR(= OP) is, 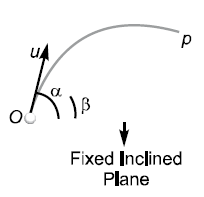 Time of ascent = Time of descent

For given projected speed and incline angle, the range would be