at any instant while

are the position of P wrt S’ and of S’ wrt S respectively at the same instant, then from vector addition, 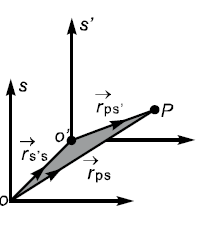 Differentiating above equation wrt time we get,

If we differentiate the last equation wrt time then we get,

where symbols have their usual meanings.

The Eqs. (i), (ii), (iii) together are termed as equations of relative motion.
Consider two bodies A and B moving with velocity

respectively, then the velocity of A wrt B is,

important to note here that velocities of both the particles are wrt the same frame of reference.

where G stands for ground the default frame of reference. As

♦The equations of motion (corresponding to constant acceleration) can also be applied to the elative motion provided relative acceleration is constant.

If we drop a particle from a moving car as shown,

While acceleration of particle wrt ground is remaining g only because only gravity effect of the earth is causing the particle to move.