Thermal equilibrium between many systems

Many systems are said to be in equilibrium if the small, random exchanges (due to Brownian motion or photon, for example) between them do not lead to a net change in the total energy summed over all systems. A simple example illustrates why the zeroth law is necessary to complete the equilibrium description.
Consider N systems in adiabatic isolation from the rest of the universe, i.e. no heat exchange is possible outside of these N systems, all of which have a constant volume and composition, and which can only exchange heat with one another.
The combined First and Second Laws relate the fluctuations in total energy, dU, to the temperature of the ith system, Ti and the entropy fluctuation in the ith system, DSi, as follows: 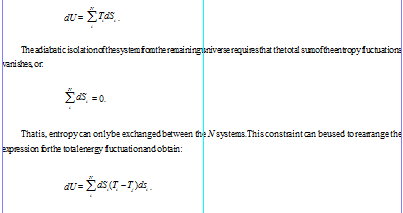 Where Tj is the temperature of any system j we may choose to single out among the N systems. Finally, equilibrium requires the total fluctuation in energy to vanish, in which case:

Which can be thought of as the vanishing of the product of an antisymmetric matrix Ti– Tj and a vector of entropy fluctuations DSi. In order for a non-trivial solution to existing,