Examples: Strain, specific gravity, angle. They are the ratio of two similar quantities.
Number, such as 8, 1/16, sinθ, μ etc.
A dimensionless quantity has same numeric value in all system of units.
Uses of Dimensional equation
A. To change the value of a physical quantity from one system to another :
n1 u1= n2 u2
Example: Convert 1 Newton into dyne.
Force = mass × acceleration. 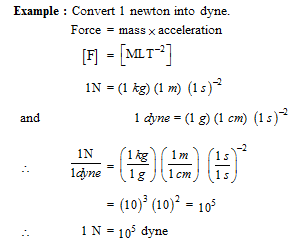 In this way, the conversion factor for any derived physical quantity can be calculated if the dimensional formula of the derived quantity is known.