To solve a question, we have to use the basic equation

If acceleration is given as a function of time, then we use

If acceleration is given as a function of velocity, then we use

Remember, that equation of motions are not applicable when acceleration is varying.

Consider a particle is projected from earth with a velocity u in vertically upward direction, then due to acceleration due to gravity its speed decreases as it rises up, becomes zero at the highest point and then falls back to the ground. For this case, we can apply equation of motions as acceleration is constant, equal to g in vertically downward direction.

For this situation, equations of motion would be

v 2 = u 2  2gy, remember the unknown quantities comes out with the sign while solving the question, don’t bother about their direction. Here, at maximum height, y = H, v = 0 so time of ascent,

corresponds to launching instant while

corresponds to the landing instant. So, time of ight is,

So, time of descent, 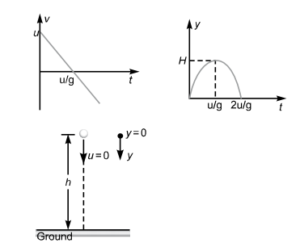 If a body is dropped from height h, then its equation of motion would be: 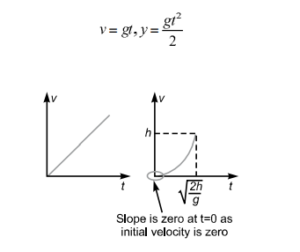 It is very important to keep in mind that equation of motions are vector equations and we use them as scalars by assigning one direction as ve and other as – ve.

Other details like the position of the object at time t, the distance travelled in the nth second could be easily obtained by using the equation of motion.