AVERAGE ATOMIC WEIGHT
For elements, which have atoms with different relative masses (isotopes) the atomic mass is taken as the weighted mean of the atomic masses.
General formula for Average atomic weight = 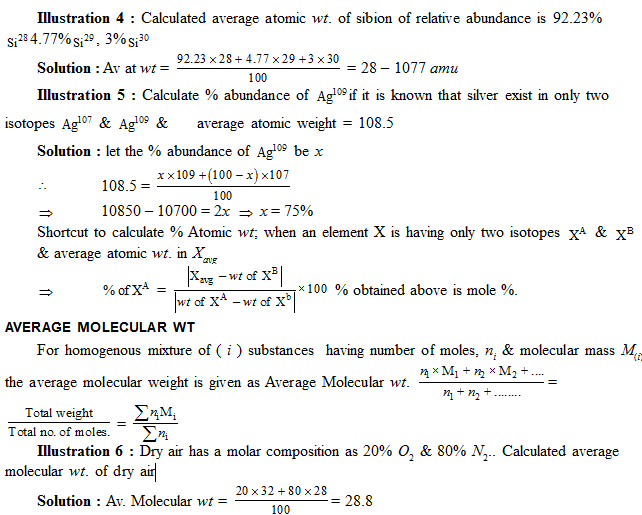 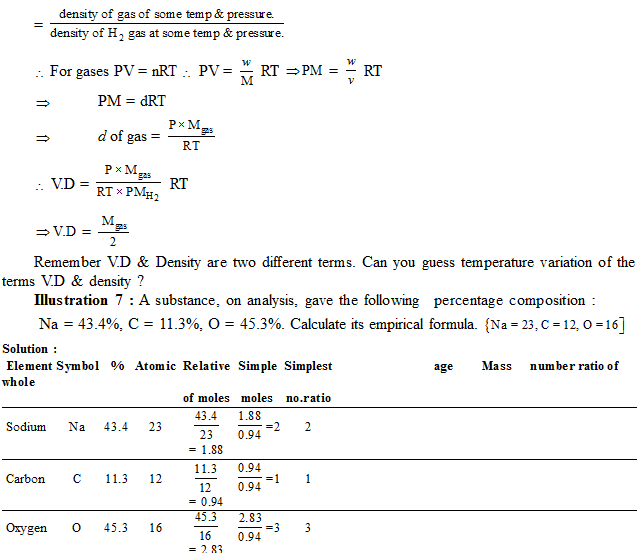 Factor-Label Method
The method is similar to mole method with a difference that this method involves the use of a factor to calculate the required amount.
For. eg. For a general reaction aA+bB→cC+dD, If the amount of any component is given & another component is required the method can be applied as. Weight of C produced

This method is most useful to solve sequential reactions or to solve problems involving percentage yield [ discussed later in Chapter]
For eg. For a hypothetical sequential reaction.
2A→B+C; 3B+2D→2E+C; E+2F→ G
If gm of “A” is taken & mixed with excess of D & F then wt. of “G” produced will be wt. of “G”

Principal of Atom Conservation (POAC)
In a chemical reaction, atoms are conserved, so moles of atoms shall also be conserved. This is known as principal of atomic conservation. This principal is helpful in solving problems of nearly all stoichiometric calculations e.g.

(Mass volume relationship of reactant and product)
In this way applying POAC we can break the chemical equation into a number arithmetic equations without balancing the chemical equation. Moreover number of reactions and their sequence from reactants to products are not required. It is important to note that POAC can be applied for the atoms which remain conserved in a chemical reaction.
Please note that the balance reaction is essential is both Mole method of solving and Factor Label Method. Only while using POAC (which would be applicable only in certain cases), balance reaction is not required.
You can use POAC for all atoms in the compound only IF all the reactants and products are known.
Another method for solving stoichiometric problems is by using equivalent concept. This method also does not require balance reaction. However, this would be dealt separately in Equivalent Concept covered in Redox Reactions.
Illustration 13: How many grams of oxygen (O2) are required to completely react with 0.200 g of hydrogen (H2) to yield water (H2O)? Also, calculate the amount water formed. (At.Mass H = 1; 0 = 16).
Solution: The balanced equation for the reaction is 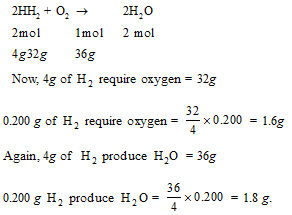 Illustration 14: What volume of oxygen at N.T.P. can be produced by 6.125 g of potassium chlorate according to the reaction 2KCIO3 → 2KCI + 3O2
Solution: The given chemical equation is:

Illustration 15 : What mass of zinc is required to produce hydrogen by reaction with HCl which is enough to produce 4 mol of ammonia according to the reactions.

Solution : The given equations are 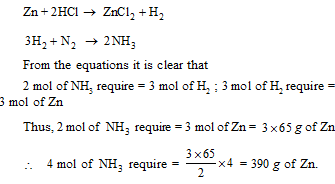 Try deriving the above relation and also get the relation between mole fraction and molarity Molarity (M) and Molality (m) for Pure Substances:
1. Water: Let the sample of water has 1000 ml
Mass of water = 1000 gm [density of water = 1gm/ML.] 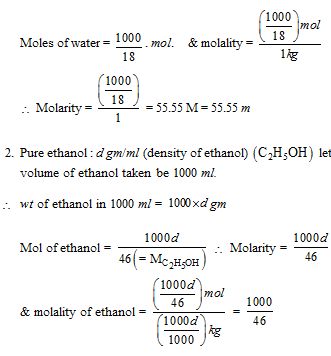 ( a mixture of H2SO4 & SO3 ).
The concentration of oleum in such cases is expressed as X% oleum, which can be defined as 100 gm of this oleum is capable of making X gms of H2SO4 when X – 100 gm of water is added into the oleum solution.
Can you guess from the definition what could be the minimum value of X while representing the concentration of Oleum? For eg. 100 g oleum means, 100 gm of oleum on addition of 9 gm of water will give 109 gm of pure
The concentration term also give an idea of the composition of H2SO4 & SO3 (“Combined SO3 ” & free SO3 ”) in the oleum.

For the above example, the composition can be calculated as follows:
The amount of H2O required gives the amount of “free SO3” present in the oleum since H2O will react with “free SO3” to give pure H2SO4 .
∴ for 109% oleum 100 gm of oleum has that much “free ” which requires 9 gm of H2O for the following reaction.
SO3+ H2O→H2SO4
Since 1/2 mole of H2O are required therefore moles of SO3 will also be 1/2
SO3 present in 100 gm of oleum =1/2 mole = 40 gm
∴ H2SO4in 100 gm of oleum = 60 gm
∴ wt. wise composition of oleum = 60 gm H2SO4, 40 gm SO3
Can you guess what will happen if we add more water than required into oleum? And what will happen when we add less water than required.
As the value of “X” increases as represented by X% oleum it is observed that % of in the mixture also increases. Can you use this info to calculate what could be the maximum value of “X” in the % of Oleum.

= 2.846 = 7
Hence, the empirical formula is MgSO4. 7H2O..
Illustration 9: What is the simplest formula of the compound which has the following percentage composition. Carbon 80%, Hydrogen 20%. If the molecular mass is 30, calculate its molecular formula. 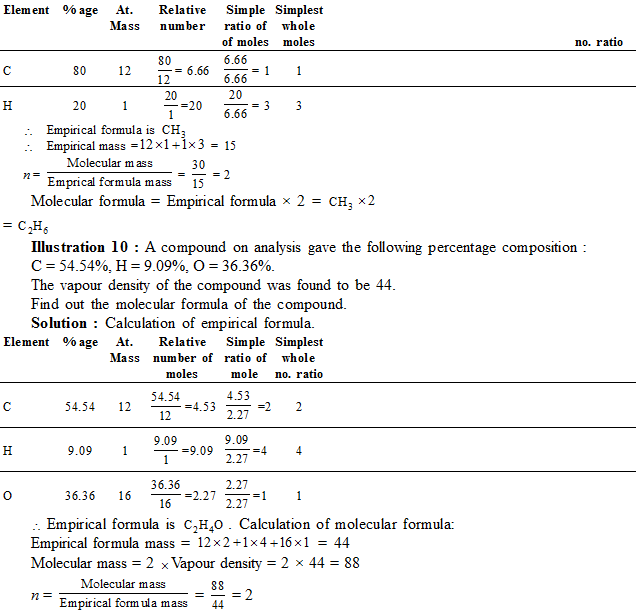 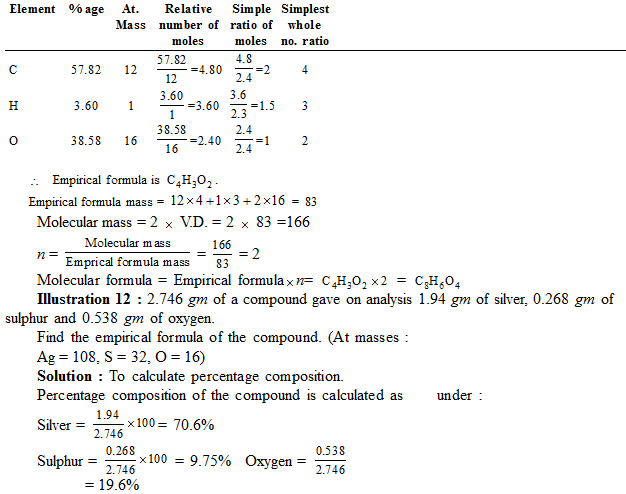 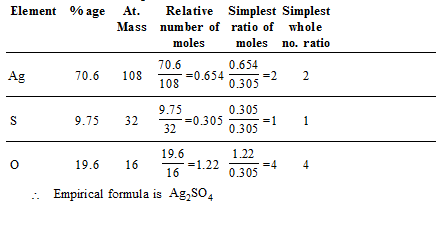 STOICHIOMETRY
The word ‘stoichmetry’ is derived from two Greek words stoicheion (meaning element) and metron (meaning measure). Stoichiometry, thus, deals with the calculation of masses (sometimes volumes also) of the reactants and the products involved in a chemical reaction. Before understanding how to calculate the amounts of reactants required or those produced in a chemical reaction, let us study what information is available from the balanced chemical equation for a given reaction. Let us consider the combustion of methane. A balanced equation for this reaction is as given below:

The above balance reaction gives the following gives information
(a) For every 1 mole of CH4, 2 mole O2 will be required to produce 1 mole of CO2 and 2 moles of H2O-Mole - Mole relation.
(b) For every 16 gms of CH4 64 gms of O2 will be required to produce 44 gms of CO2 and 36 gms of H2O.
(c) Ratio of moles of CO2: H2O at any time = 1: 2
(d) There will be no change in total mass of all reactants and products at any time for any chemical reaction.
(e) For the above reaction only, there will be no change in a total number of moles of all reactants and products. In order to solve the problems based on chemical calculations the following steps, in general, are quite helpful.
(i) Write the balanced chemical equation.
(ii) Write the atomic mass/molecular mass/moles/molar volumes of the species involved in calculations.
(iii) Calculate the result by applying unitary method.
There is no law of conservation of moles.
Apart from the usual Mole method used for solving stoichiometric problems, sometimes Factor Label Method and POAC method are also used depending upon the type of problem.
Students are advised to have an understanding of the utility of each of the method for solving stoichiometric problems.

Illustration 16: 1.20 gm of a sample of Na2CO3 and K2CO3 was dissolved in water to form 100 ml of a solution. 20 ml of this solution required 40 ml of 0.1 M HCl for complete neutralisation. Calculate the weight of Na2CO3 in the mixture.
If another 20 ml of this solution is treated with an excess of BaCl2 what will be the weight of the precipitate? 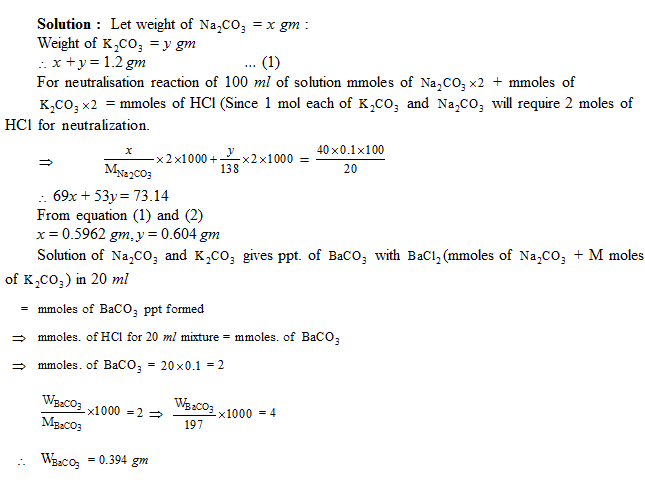 The actual amount of any limiting reagent consumed in such incomplete reactions is given by [% yield given moles of limiting reagent] [For reversible reactions]. For irreversible reaction with % yield less than 100, the reactants are converted to product (desired) and waste.
Can you now guess what factor should be added while solving the problem using factor label method if the % yield or % purity is also mentioned in the numerical?
CONCENTRATION TERMS
Many chemical reactions occur in the solution state and
hence stoichiometric problems may sometimes involve different concentration terms of solutions to give an idea of the amount of solute and solvent present in the solutions. There are various ways to represent the concentration of the solution as mentioned below.
In a solution, the designation of solute and solvent is often a matter of convenience, however, many times the one present in smaller quantity is termed as a solute.Also, a solution may have more than one solute but solvent cannot be more than one.
All the concentration terms given below are applicable only when there is a homogenous solution or when solute completely dissolves in the solvent.
Method of Expressing Concentration of Solution
For each of the concentration terms, classify them which type of ratio are they (w/w or w/v or v/v)? Also, guess whether they will be temperature dependent or not?