Conquest of Sind (712 AD): The conquest of Sind by the Arabs under Mohammed Bin Qasim in 712 AD was a “triumph without result.” The administration was left mostly in the hands of the natives.
Suitan Mahmud of Ghazni (997-1030 AD): He was the son of Suhuktin, the Amir of Ghazni. He led as many as 17 expeditions into India, the most famous being that of Somnath in 1025.Alberuni and firdausi were very famous scholars in his court.
Mohammad Ghori (1175-1206 AD): Sahab-ud-din Mohammad Ghori invaded India and defeated local rulers. He laid the foundation of the Muslim dominion in India. He may be considered the real founder of Muslim rule in India.
The Sultanate of Delhi (1206-1526 AD): The period from 1206 to 1526 is known in Indian history as the Sultanate of Delhi or the Pathan Period.

Bahmani Kingdom (1346-1526): It was the Muslim Kingdom established in the Deccan during the reign of Mohammad Tughlak. The kingdom was founded in 1347 by Zafar Khan, a brave soldier. The most important of this kingdom was Mahmud Gawan, a Persian.
Vijayanagar Kingdom (1336-1665): It was a Hindu kingdom in the Deccan, situated to the south of Bahmani kingdom from the Krishna to Cape Comorin. It was founded during the reign of Mohammad Tughlak by two Hindu brothers Harihar and Bukka in 1336. The most famous king of this kingdom was Raja Krishna Deva Roy. He was a very learned man, capable ruler and a great warrior, who often defeated the Muslims. The last king of this dynasty was Rama Raja. In 1564-65, the fierce Battle of Talikota ended the Vijayanagar kingdom.
The Marathas: Shivaji was the founder of the Maratha kingdom. The Maratha method of warfare was guerilla warfare. The Peshwas, who were also Marathas, ruled from 1701 to 1818 AD. Baji Rao was their ablest ruler. 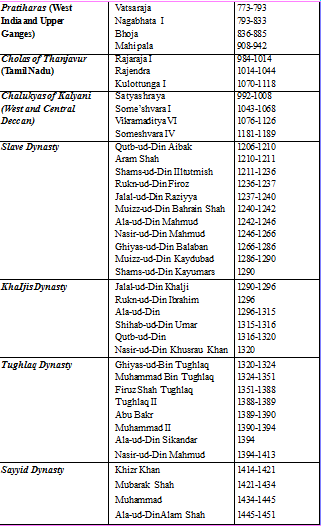 Nirguna Bhakti Saints
(i) Ramananda: He was a pioneer Nirguna saint. Greatly influenced by Ramanuja, he gave his teachings in Hindi, the language of the common people. Kabir, Raidas and Dadu were his prominent disciples.
(ii) Kabir: He, a weaver, was perhaps the most outstanding mystic of his times (1398-1518). His songs are noted for their literary excellence, conveying a great spiritual and moral message to the world. He sharply condemned caste and religious distinctions.
(iii) Raidas: He was a contemporary of Kabir and a fellow-disciple of Ramananda. He was a cobbler. He composed songs brimming with love and devotion.
(iv) Dadu Dayala: A native of Ahmedabad, Gujarat, he was another great exponent of the Nirguna school.
(v) Sunderdasa: He was a great disciple of Dadu, and a vaisya by caste.
(vi) Guru Nanak: The founder of Sikhism, Guru Nanak was a great mystic of the Nirguna school. He was a wandering preacher of a castless, universal, ethical, anti-ritualistic, monotheistic and highly spiritual religion.
Saguna Bhakti Saints
(i) Ramanuja: In 11th century, Ramanuja tried to assimilate Bhakti to the tradition of Vedas. He argued that grace of God was more important than knowledge about him in order to attain salvation. The tradition established by Ramanuja was followed by number of thinkers such as Madhvacharya, Ramananda, Vallabhacharya and others.
(ii) Jnandeva: He was progenitor of Bhakti movement in Maharashtra.
(iii) Ekanath: He was opposed to caste distinction and evinced greatest sympathy for men of low caste.
(iv) Tukaram: He was a farmer’s son and a great devotee of Vitthal.
(v) Ramdas: He established ashramas all over India. It was from him that Shivaji received the inspiration to overthrow Muslim authority and found the kingdom.
(vi) Surdasa: He belongs to Saguna School. He was a disciple of famous religious teacher Vallabhacharya. He sang the glory of Krishna’s childhood and youth in his Sursagar.
(vii) Tulsi Das: He belongs to Saguna school of Hindu Mystics. He composed the famous Rammacharitamanas.