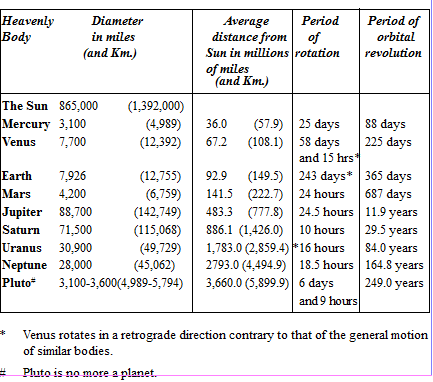 Movement of the Earth: The Earth moves in three main ways: (i) It revolves around the Sun once every 365 days, 5 hours, 48 minutes, and 46 seconds at a speed of 66,000 mph (106,200 kph). (ii) It spins on its axis at a speed of 1,038 mph (1,670 kph) at the equator. The tilt of the Earth’s axis is 23 Vz° from a line perpendicular to its path around the Sun. (iii) Together with the rest of the solar system, the Earth is moving around the Milky Way.
Earth’s Satellite; the Moon: .The Moon’s diameter is 2,160 miles (2,376 km)—about one-fourth the size of the earth. The Moon orbits the Earth at an average distance of 238,887 miles (384,400 km).
The Changing Year: In 1582, the Gregorian calendar was adopted. This calendar is based on the idea of a seven-day week. To eliminate the odd days, each year in the Gregorian calendar begins one day later in the week than the previous year. Leap years are fixed for every year that can be divided by four, such as 1976 and 1980.
Days and Time: The Earth takes 23 hours, 56 minutes, and 4.1 seconds to spin round once on its axis. Because the Earth is divided into 360°of longitude and it completes one spin on its axis in a day (24 hours), time alters by one hours for every 15° of longitude (36024).
International Date Line: The prime meridian, or 0° longitude, from which the time zones are measured, passes through Greenwich, England. A person travelling west of Greenwich for 180° of longitude would have to put his clock back by 12 hours.
Seasons: The tilt of the Earth’s axis is also responsible for seasons. Spring in the Northern Hemisphere begins on March 21, when the sun is overhead at the equator. March 21 is called the vernal equinox. After March 21, the overhead sun moves northwards until it reaches its northernmost point on June 21 (summer solstice). The overhead sun then moves south back towards the equator, where it is again overhead on a rjotit September 20, the autumnal equinox. On December 22, the winter solstice, the overhead sun reaches its southernmost point.
The Earth’s Structure: The Earth’s crust averages 20 miles (32 km) in thickness beneath the continents and about six miles (9.7 km) under the oceans. About 200 million years ago, the land masses were all grouped in one large continent, which geologists call Pangaea. This continent split into two parts, Lauraslia and Gondwanaland, which drifted northwards. These two smaller continents later broke up and moved slowly to their present positions. This movement called continental T drift, is still continuing.
There are several physical structures on the earth, such as mountains rocks and rivers.
STATISTICAL DATA OF THE EARTH
The Earth is the fifth largest planet in the solar system. Some important data relating to this planet are as follows:

The Panchang (five limbs) is a book of tables, containing a calendar of months and days with astronomical data and calculations, days of festivals and auspicious times (mahurtams) and other useful information.
Every year, astronomers from all over India meet at the Jaipur Observatory and prepare the almanac with the help of various instruments built more than 250 years ago by Sawai Raja Jai Singh.