Electricity is an integral part of our life. We cannot imagine most of the comforts of the modern life without electricity. Nowadays, you will see everyone carrying a mobile phone. Many of them carry a power bank so that their smartphones can be assured of a continuous supply of electricity. We use electricity while doing most of our daily activity. We need the ceiling fan or air conditioner to work; for ensuring a sound sleep. We need electricity for using various household appliances; like mixer grinder, washing machine, geyser, etc. In this lesson, you will learn about electric current and some of its effect. You will also learn about the factors which influence the flow of electric current.

What is common in above examples; is that the switch needs to be on in order to facilitate the flow of electric charge. What does the switch do? When a switch is put on, it creates a closed path through which electric charge can flow. Electric charge cannot move through an open path. The closed path through which electric current moves is called electric circuit. A switch is a device which allows us to open or close a circuit as per the need. A switch also helps us in saving electricity because it allows us to use electric current when we need it. Moreover, it also helps in preventing wear and tear of electrical appliances. Imagine a situation in which your torch would always be on. It would have consumed all the power of an electric cell. Your electricity bill could have gone through the roof had there been no switch in your household wiring.

Important Note: We know that solids have atoms packed very tightly. Electrons; having very low energy; should face difficulty while moving through a solid conductor. But in real life, electrons easily move through the lattice in a solid; as if they are moving in a vacuum. But electrons move at a very slow rate through a solid conductor; unlike the movement of charge in empty space. When scientists calculated they found the through a copper wire electrons moved at a speed of 1 mm per second.

Let us assume that a net charge Q flows across any cross-section of a conductor in time t. Then the current I, through the cross-section can be given by the following equation:

The SI unit of electric charge is coulomb which is expressed as ‘C’. One coulomb is equivalent to the charge possessed by about 6 x 1018 electrons.

The SI unit of electric current is ampere (A). This unit is named after the French scientist Andre-Marie Ampere (1775 – 1836). One ampere can be defined as a 1-coulomb charge in 1 second.

For expressing smaller quantities of electric current; milliampere or microampere are used. 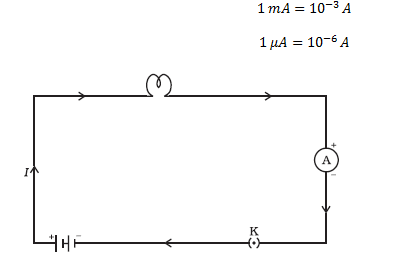