These resources are present in unlimited quantity in nature. e.g. water, sunlight.

Renewable Resources :
The resources that can be regenerated or renewed naturally are called renewable resources. For example sunlight, air, wind etc.

Coal
Coal is a form of carbon, It is black in colour and it is a hard fossil fuel. Coal is found in deep coal mines under the
surface of the earth. In India, coal is mainly found in Bihar, Jharkhand, West Bengal, Odisha and Madhya Pradesh. The slow chemical process of the conversion of the dead plants into coal is called carbonisation.

How is coal converted to Electricity?

Steam Coal, also known as thermal coal, it is used in power stations to generate electricity. Coal is first milled to a fine powder, which increases the surface area and allows it to burn more quickly. In this pulverised coal
combustion (PCC) systems, the powdered coal is blown into the combustion chamber of a boiler where it is burnt at high temperature (see in the diagram). The hot gases and heat energy produced converts water into steam. 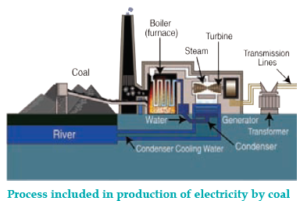 The high-pressure steam is passed into a turbine containing thousands of propeller-like blades. The steam pushes these blades causing the turbine shaft to rotate at a high speed. A generator is mounted at one end of the turbine

shaft and consists of carefully wounded wire coils. Electricity is generated when these are rapidly rotated in a strong magnetic field. After passing through the turbine, the steam is condensed and returned to the boiler to be
heated once again. The electricity generated is transformed into the higher voltages (up to 4,00,000 volts) used for
economic, efficient transmission via power line grids. When it is near the point of consumption, such as our homes, the electricity is transformed down to the safer 100-250 voltage system used in the domestic market.