As you have studied that there is a huge variety of plants and animals around. However, there is also a group of organisms that we cannot see through our naked eyes. What are these called? These are called microorganisms.

Important note: Compound microscopes are also called as light microscope as it uses light to illuminate the object. 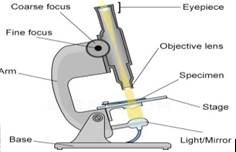 Did you know, Anton Van Leeuwenhoek made the first simple microscope in 1668? He was the first person to observe microorganism using a microscope of his own design.

Microorganisms make up the largest living organisms on the planet.

There are five major groups of microorganisms. They are:

Bacteria: Bacteria are small, single-celled organisms that are present everywhere on land, in water, in the air and in the bodies of most of the organisms. It occurs in various sizes and shape. Based on the shape, they are classified into three groups:

Fungi: Fungi are non-green plant-like organisms that do not contain chlorophyll. They can be unicellular or multicellular organisms. Have you ever seen the whitish greyish patch on the slice of bread? Can you guess, what are these?

Yes, these are a fungus, a multicellular organism that has developed on the surface of the bread. If you carefully look at the surface of a slice of bread under a microscope, you may find several tiny threads like structures called hyphae. A mass of hyphae is known as mycelium.

Most of the fungi are microscopic and not visible to naked eyes, like yeast and bread mould. There are some examples of fungi that can be easily seen through naked eyes. The example includes Mushroom.

Protozoan: Protozoan is a single-celled microscopic animal that includes Amoeba, Paramecium They can be unicellular or multicellular. They can move from one place to another. Some protozoan lives in fresh or salt water, some of them are parasites while some lives in soil.

Algae: Have you ever seen a green layer floating on the surface of a pond, lake or even in the stagnant part of a river. Have you ever thought, what are these? Any guesses? Yes, they are actually Spirogyra is a green filamentous alga that is commonly seen in freshwater habitats.

An alga is a large group of simple, plant-like organisms. They contain chlorophyll and carry out the process of photosynthesis just like plants. Diatoms, blue-green algae and seaweeds are some examples of algae.

Viruses: Virus is the smallest microorganisms that are visible only through an electron microscope. They are much smaller than bacteria. They do not show much of the characteristics of living things. For example, they do not respire, feed, grow, excrete or move on their own. They are just capable of reproducing. Viruses can multiply and reproduce only inside the cells of other organisms like plants, animals and bacterial cells. Thus, as long as viruses are outside the living cells, they behave as non-living things but as soon as viruses enter the living cells of other organisms, they start behaving as living cells and make hundred and thousand copies of itself by using the host machinery. Hence, viruses are said to be on the borderline dividing the living thing from non-living things.

Rous sarcoma and HIV are examples of the virus.

Ans. The microorganisms like bacteria and protozoa can be seen through a microscope. The fungus that grows on the bread can be seen with a magnifying glass.

Ans. Micro-organisms are the tiniest possible living organisms that are too small to be seen through naked eyes. Actually, they are living organisms that can be seen only with a microscopic or magnifying glass. Also, they make up the largest living organisms on the planet. They are just billions or trillions around the earth and are present everywhere in our environment, in the soil, in water and in the air, in the refrigerator, in the bathroom, in foods, floors, toys and even in our body.

Ans. Viruses are mysterious micro-organisms because they fall on the threshold of living and non-living beings. They are the smallest microorganisms that are visible only through an electron microscope. Viruses are much smaller than bacteria and do not show much of the characteristics of living things. For example, they do not respire, feed, grow, excrete or move on their own. They are just capable of reproducing. Viruses can multiply and reproduce only inside the cells of other organisms like plants, animals and bacterial cells.