Formation of Soil
The soil was not present on earth at the time of its formation. Long ago, the ground was mostly solid rock. Over millions of years, this rock got partially changed into the soil by a process known as weathering. Weathering is the breaking down of huge pieces of rocks into smaller pieces by the action of natural forces, such as water, glaciers, wind and roots of plants, etc. Some of the agents of weathering act as mentioned below:
• The role of water in weathering of rocks is particularly important. Rainwater enters crevices of rocks. In winter, as this water freezes, it expands. This expansion breaks the rocks into smaller pieces.
• The broken pieces cool down by the force of flowing water or the wind. As they collide against the ground and against each other, they break down further. Finally, they get converted into very fine particles and mix with hummus to form soil.
• Roots of trees growing through rocks exert great pressure on the rocks. This causes cracks in the rocks, leading to weathering.
• The Large variation in day and night temperatures, for example, in northern India, also causes weathering. The rocks expand during the day and contract at night. This constant expansion and contraction weaken the rocks, and they crack and crumble.
• In hot and humid climates, high temperature causes chemical weathering to occur. The minerals in rocks react with the oxygen of the air. Such oxidised rocks crumble to form soil. Weathering of rocks is a slow process. It takes hundreds of years to produce a few centimetres of soil.
Soil Profile
Have you ever seen a deep hole in the ground, such as that dug up for laying the foundation of a building? You may have noticed that soil changes colour as one goes deeper. The size of the bits of rocks changes too. The main layers of soil are topsoil, subsoil and the parent rock.

Topsoil (A-horizon)
Humus and the smallest particles of rock from the upper layer of soil called topsoil or A-horizon. The presence of humus gives it a dark colour. It is the layer containing the most nutrients for plants. The roots of most plants
are confined to this layer. Humus makes this layer porous and fertile.
Fig. 2: The layers of soil 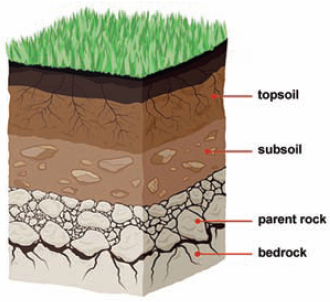 This is the layer below the topsoil. Subsoil does not have much humus and is, therefore, lighter in colour than topsoil. It is made up mostly of rock bits and some nutrients, such as soluble minerals and iron oxides. Rainwater
collects in this layer.
Parent rock (C-horizon)
Below the subsoil is the parent rock or C-horizon, which consists of small pieces of rocks with cracks and crevices. The particles of rocks found in soil come from the weathered rock in the C-horizon.
Below this is solid rock called bedrock. It is non-porous. Rainwater gathers over it to form the water table.