Study Material for Class 6 to 12 And Competitive exams and IIT-JEE, AIIMS and NEET Exams.

1. How the plants obtain water for photosynthesis? :
Ans: Plants take water from the soil, needed for photosynthesis. Soil always contains some water in it. The roots of the plant absorb water and minerals from the soil and then transports it to the leaves through the vessels which run like inter-connected pipes throughout the roots, stems, branches and leaves. The tiny, pipe-like vessels which transport water from the roots of the plant to its leaves are called xylem.
2.Why is chlorophyll required in photosynthesis?
Ans: Chlorophyll is a green coloured substance, which is present in the leaves, due to which the colour of leaves is green. The energy of the sunlight is absorbed by chlorophyll. Chlorophyll is present in every leaf of a plant in the form of hundreds of tiny structures called chloroplasts 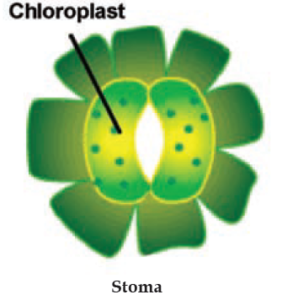 The tiny green structures in the cells are

4.How do plants get nitrogen?
Ans: We know very well that nitrogen is present in abundance in gaseous form in the air. However, plants cannot directly absorb nitrogen in this form. Soil contains certain bacteria, called nitrogen-fixing bacteria that convert gaseous
nitrogen into nitrogenous compounds (like nitrates) and release them into the soil. Nitrates are the water-soluble nitrogen compounds which are absorbed by the plants from the soil along with water. In this way, the plants
fulfil their requirement of nitrogen.

KEYWORDS
Autotrophs: Organisms that can make their own food from simple non-living substances.
Heterotrophs: Organisms which cannot make their own food i.e., directly or indirectly and depend on green plants.
Stomata: Tiny pores present on the surface of leaves.
Chlorophyll: Green pigment that is present in the green parts of a plant (as on stem, leaves)
Chloroplast: Cell organelle which contains chlorophyll.
Saprotrophs: Organisms that live on dead plants and animals and derive their food from them.
Symbiosis: The mode of nutrition where two different organisms work together for their mutual benefits.

POINTS TO REMEMBER
• The process by which an organism produces food is called nutrition.
• Nutrition is of two types — Autotrophic and Heterotrophic.
• Green plants are autotrophic as they make their own food with the help of carbon
dioxide, water and sunlight by a process called photosynthesis.
• Chlorophyll is the pigment which traps solar energy for the process of photosynthesis.
• Heterotrophs are organisms which cannot make their own food and depend on plants for their food requirement. Heterotrophic nutrition is of two types – saprotrophic, and parasitic.
• Extra glucose is changed into another food item called starch in the green plants. The starch is stored in the leaves, roots and fruits of the plant.
• The membrane inside chloroplast (i.e. thylakoids) contains molecules of green photosynthetic pigment, the chlorophyll.
• The mutual association in which two different types of organisms live and work together for their mutual benefits from each other is called symbiosis.