Class 7 Science Nutrition in Animals In the mouth

Nutrition in Animals In the mouth

The mouth leads the food into the buccal cavity or oral cavity. The buccal cavity contains teeth, tongue and salivary glands. The teeth cut the food into small pieces, chews and grind it. The salivary glands secrete a watery juice called saliva. The tongue helps in mixing the saliva with the food. Saliva is a digestive juice, which helps to digest the starch present in the food part. The slightly digested food is swallowed by the tongue and goes down into the oesophagus (or food pipe). 2. Pharynx and Oesophagus The tongue pushes the chewed food into a short muscular tube called the pharynx. From the pharynx, the food goes into a long and narrow muscular tube called the oesophagus. Oesophagus carries the slightly digested food from the mouth to the stomach through the peristalsis movement of the muscles of the oesophagus. Digestion of food doesn’t take place in the oesophagus.

The stomach is a J-shaped, thick-walled organ on the left side of the abdomen. It is the widest part of the alimentary canal. The food is further digested in the stomach. The food is churned in the stomach for about 3 hours. During this time, the food breaks down into smaller pieces and makes a semi-solid paste. The inner lining of the stomach secretes mucus, hydrochloric acid and some other digestive juices, like pepsin.

Sometimes, we vomit food. This happens when our stomach rejects the food we have eaten. The antiperistaltic movements of the stomach wall and the oesophagus push the food up to the food pipe.

In the Small Intestine

(a) Liver: It is the largest gland in the stomach or body. It secretes bile juice, which is stored in a sac called the gallbladder: Fats are digested with the help of bile juice. Fats are present as big droplets in the food because of which they cannot be digested easily. Bile juice breaks these big droplets into small droplets and makes their digestion easier.

(b) Pancreas: Pancreas secretes pancreatic juice that breaks down fats completely into fatty acids and glycerol. Pancreatic juice also breaks down starch, carbohydrate and proteins into simpler forms.
(c) Intestinal juices: The partly digested food now reaches the lower part of the small intestine. The walls of the small intestine secrete a digestive juice called ‘intestinal juice’. This juice breaks down the starch carbohydrate completely into the simplest sugar called glucose, and the proteins into amino acids. 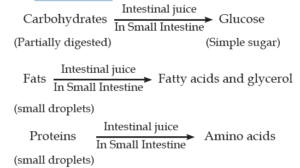 The minerals and vitamins present in the food do not need to be changed. Cells are capable to absorb them as they are.

Absorption in the small intestine
The process of absorption occurs in the small intestine. This happens as follows: The inner the surface of the small intestine has millions of tiny, finger-like outgrowths called Villi (Read as Vee-la-ee; singular of villi is villus).
The presence of villi gives the inner walls of the small intestine a very large surface area (which helps in the rapid absorption of food). Thus, the role of the villi in the small intestine is to increase the surface area for the
rapid absorption of digested food. The surface of villi absorbs the digested food materials into the blood flowing through them. Blood carries the absorbed food materials to the cells in all the parts of the body. Food is used
for energy, growth and repair, in cells. This is called assimilation. Glucose breaks down in the cells, with the help of oxygen to form carbon dioxide and water and release energy. Fatty acids and glycerol build components of cells and from fats to be stored in the body as food reserves. Amino acids are used to make proteins required for the growth and repair of the body. 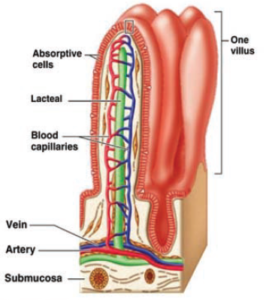