Study Material for Class 6 to 12 And Competitive exams and IIT-JEE, AIIMS and NEET Exams.

Autotrophic mode of Nutrition
Green plants take carbon dioxide and water from the environment and transform them into glucose and oxygen with the help of sun’s energy, trapped by a green pigment called chlorophyll.

What is the Heterotrophic mode of Nutrition?

The process by which green plants make their own food (such as glucose) from carbon dioxide and water by using sunlight in the presence of chlorophyll is called photosynthesis. The process of photosynthesis can be represented by a word equation as follows :

Photosynthesis cannot occur in the absence of any one of these conditions. We will now describe how the leaves of a

plant get carbon dioxide and water required for making food by photosynthesis and what are the roles of chlorophyll and sunlight in photosynthesis.

1. How do plants obtain carbon dioxide for photosynthesis:
Plants take carbon dioxide gas from the air with the help of tiny pores (called stomata) present on the surface of leaves. (The singular of stomata is stoma). Each pore (stoma) is surrounded by a pair of guard cells. The opening and closing of stomatal pores in leaves is controlled by the guard cells as shown in figure, shows open 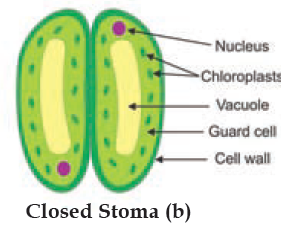 4. Heat and its effect

11.Transportation in Animals and Plants

14. Electric current and its Effect