Very Short Answer Type Questions.
1. Name the three parts of the skull.
2. What is a joint?
3. Which of the two moves faster: a snail or an earthworm?
4. What are the ligaments?
5. What kind of arrangement is found in the ball and socket joint?
6. What is slithering?
7. Name the organs used by fish for swimming.
8. Why do animals move?
9. Does snake have a backbone?
10. Name the two types of muscles found in our arms.

Ans: 1. The cranium and facial bones
2. The point where the two bones connect with each other is called joint.
3. An earthworm
4. The bones of a joint are connected to each other by strong fibrous tissue called ligaments.
5. The joint in which the rounded end of one bone fits into the cavity (hollow space) of the other bone is called ball and socket joint.
6. During movement, a snake contracts its muscles, thrusting its body from side to side, creating a series of curves. It moves in S-shaped loops and in a zig-zag manner. This movement is called slithering.
7. Fins
8. The animals move:
• In search of food
• Shift from unfavourable environment to a favourable environment
• Find their partners for reproduction and reach favourable areas for laying eggs or rearing their young ones.
• Escape away from their enemies.
9. Yes
10. Tricep and Bicep

E. Short Answer Type Questions.
1. What is the significance of locomotion in animals?
2. What is cartilage? List its function?
3. How do the following animals move?
(i) Birds
(ii) Snake
(iii) Earthworm
(iv) Snail
4. Write the main function of the skull.
5. Name two hinge joints and two ball and socket joints in our body. Where can you find fixed joints in the human
skeleton?
6. What is rib cage? State the functions of the rib cage.
7. How does locomotion differ from movement?
8. Give one example each of
(a) a hinge joint
(b) a pivot joint
(c) a ball and socket joint
(d) a fixed joint
9. Differentiate between bone and cartilage.

1. Locomotion in animals helps in:
• In search of food
• Shift from unfavourable environment to a favourable environment
• Find their partners for reproduction and reach favourable areas for laying eggs or rearing their young ones.
• Escape away from their enemies.
2. Cartilage is a soft tissue attached to bones and is also present independently. If attached to bones, it gives them protection and helps in the movement. Cartilage is much softer than bones. Cartilage can bend without breaking.
3. (i) Birds—The forelimbs in birds are modified into wings for flight. There are special muscles attached to bones
that are adapted for flight in birds. Birds also have hollow, light and strong bones that make them fly easily in air.
Their wings are covered with feathers. The feathers on the tail and wings give a large surface area, which helps to lift the birds upwards and keep the bird in the air. Birds have large powerful chest muscles to allow them to flap their wings.
(ii) Snake—During movement, a snake contracts its muscles, thrusting its body from side to side, creating a series of curves. It moves in S-shaped loops and in a zig-zag manner. It cannot move in a straight line.
(iii) Earthworm—An earthworm moves by lengthening and ‘shortening’ its body alternately by using the circular
muscles and longitudinal muscles, respectively. The muscular movement pushes their blood in the direction of
the body movement.
(iv) Snail—It is a very slow moving animal. The muscular foot has a special gland that secretes slimy mucus to make snail slip on the floor.
4. The cranium covers and protects the brain. The facial bones comprise of the upper and the lower jaw and few other bones. The lower jaw is movable, which enables us to talk, eat and even sing. The eye sockets are also included in the skull. The eye socket is the safe pocket for the eye.
5. The joints between the shoulder and the upper arm and between thigh and hip are ball and socket joint.
The hinge joint at our elbow allows you bend your forearm and straighten it. It does not let us bend our arm backwards or sideways. The knee joint is another example of the hinge joint.
6. There are twelve pairs of thin and curved bones called the ribs. The rib cage is formed of the flat and long bones. These bones form a rib cage which protects the heart and the lungs. Ribs are attached to the sides of each
vertebra at back and the first ten pairs of these ribs are attached to the breastbone at the front with help of cartilage. The last two pairs of ribs are free in the front end are called floating ribs.
7. The movement of the whole body of an organism from one place to another is called locomotion. The change in the position of any part of the body with respect to its axis is called movement.
8. Give one example each of
(a) a hinge joint — knee joint
(b) a pivot joint — joint in the skull
(c) a ball and socket joint — joint between thigh and hip
(d) a fixed joint — the bones of the skull 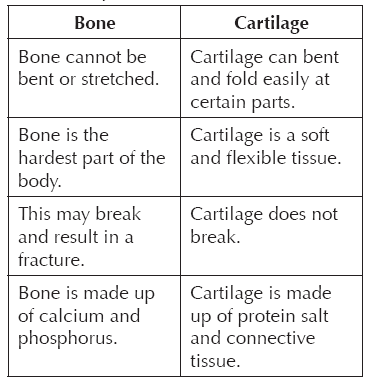