Hydrogen Spectrum :
If an electric discharge is passed through hydrogen gas is taken in a discharge tube under low pressure, and the emitted radiation is analysed with the help of spectrograph, it is found to consist of a series of sharp lines in the UV, visible and IR regions. This series of lines is known as line or atomic spectrum of hydrogen. The lines in the visible region can be directly seen in the photographic film.
Each line of the spectrum corresponds to a light of definite wavelength. The entire spectrum consists of six series of lines each series, known after their discovery as the Lyman, Balmer, Paschen, Brackett, Pfund and Humphrey series. The wavelength of all these series can be expressed by a single formula which is attributed to Rydberg. 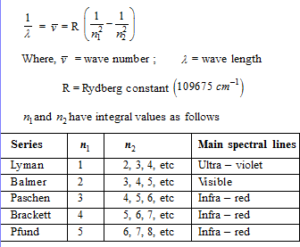 “Note: All lines in the visible region are from the Balmer series but the reverse is not true i.e. all Balmer lines will not fall in visible regions.” 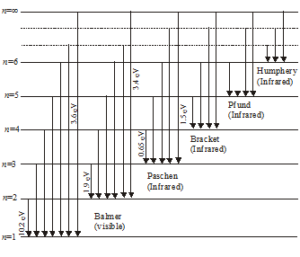 As discussed earlier, the above pattern of lines in the atomic spectrum is characteristic of hydrogen. Explanation of hydrogen spectrum by Bohr’s theory

According to the Bohr’s theory electron neither emits nor absorbs energy as long as they stay in a particular orbit.
However, when an atom is subjected to electric discharge or high temperature, and electrons in the atom may jump from the normal energy level, i.e., ground state to some higher energy level i.e. the excited state. Since the lifetime of the electron in the excited state is short, it returns to the ground state in one or more jumps.
During each jump, energy is emitted in the form of a photon of light of definite wavelength or frequency. The frequency of the photon of light thus emitted depends upon the energy difference of the two energy levels concerned and is given by

The frequencies of the spectral lines calculated with the help of above equation are found to be in good agreement with the experimental values. Thus, Bohr’s theory elegantly explains the line spectrum of hydrogen and hydrogen species.

Bohr had calculated Rydberg constant from the above equation.

Further application of Bohr’s work was made, to other electron species (Hydrogenic ion) such as He+and Li2+ . In each case of this kind, Bohr’s prediction of the spectrum was correct.

Now after obtaining the explanation of Rydberg’s equation from Bohr’s theory, can you derive what could be the equation for other uni-electronic species? What would be the value of Rydberg’s constant for He+1 Li+2 ,?
Illustration: Find the longest wavelength of absorption lines for hydrogen gas containing atoms in the ground state. 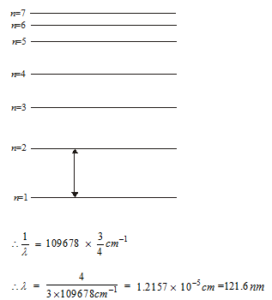 Illustration: The series limit for the Paschen series of hydrogen spectrum occurs at 8205.8A. Calculate.

(a) the ionization energy of hydrogen atoms
(b) Wavelength of the photon that would remove the electron in the ground state of the hydrogen atom.
Solution : (A) Energy corresponding to 8205.8A° 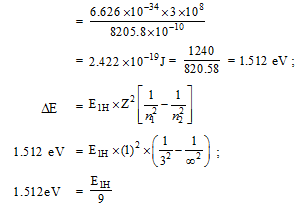 Illustration: Calculate frequency of the spectral line when an electron from Bohr orbit jumps to the second Bohr orbit in a hydrogen atom

Illustration: Calculate the energy of an electron in Bohr orbit.

Calculate the energy in kilojoules per mole of electronic charge accelerated by a potential at 1V.

We know that energy in joules is equal to the charge in oulomb’s potential difference in volts.

Illustration: What is the highest frequency photon that can be emitted from hydrogen atoms? What is the wavelength of this photon? 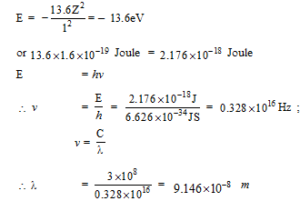 Illustration: Calculate the longest wavelength transition in the Paschen series of He+. 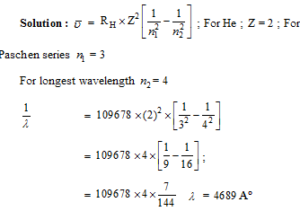 Illustration: Calculate the ratio of the wavelength of the first and the ultimate line of Blamer series of?

Solution: wavenumber for the first line of Blamer,

The wavelength of the first line of Blamer

Wavenumber is the ultimate line of Blamer,

The wavelength for the ultimate line of Blamer series

Merits and Drawbacks of Bohr’s Model :

(i)    The experimental value of radii and energies in a hydrogen atom is in good agreement with that calculated on the basis of Bohr’s theory.

(ii)   Bohr’s concept of the stationary state of electron explains the emission and absorption spectra of hydrogen-like atoms.

(iii) The experimental values of the spectral lines of the hydrogen spectrum are in close agreement with that calculated by Bohr’s theory.

(i)    It does not explain the spectra of atoms having more than one electron.

(ii)   Bohr’s atomic model failed to account for the effect of the magnetic field (Zeeman Effect) or electric field (Stark effect) on the spectra of atoms or ions. It was observed that when the source of a spectrum is placed in a strong magnetic or electric field, each spectral line further splits into a number of lines. This observation could not be explained on the basis of Bohr’s model.

(iii) De Broglie suggested that electrons like light have a dual character. It has particle and wave characters. Bohr treated the electron only as particles.

(iv)       Another objection to Bohr’s theory came from Heisenberg’s Uncertainty Principle. According to this principle “It is impossible to determine simultaneously the exact position and momentum of a small moving particle like an electron”. The postulate of Bohr, that electrons revolve in well-defined orbits around the nucleus with well-defined velocities is thus not tenable.