Hypothalamic – hypophyseal portal vein transfers blood from hypothalamus to the hypophysis. It occurs in higher vertebrates.
Cardiovascular system includes
♦ Blood vessels (capillaries, arteries and veins)
♦Blood
♦ Heart
Capillary is the network of very thin (7-9 µm diameter)terminal branches of arterioles. This conducts an exchange of substances between the blood and the tissue fluid. They join to produce venules. This was discovered by Malpighi (1661).
Histologically, a capillary includes :
♦ An inner layer of flattened endothelial cells
♦ A basement membrane and
♦ And scattered contractile pericytes around the capillary. 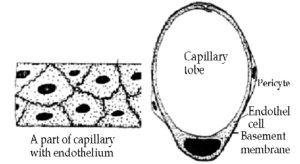 In some locations such as renal glomerulus, the ciliary process of the eye, choroid plexus, the endothelium of the capillary is porous (= fenestrated endothelium). The pores facilitate fluid transport. The endothelial cells in these locations lack cytoplasm and have only a thin diaphragm.

The capillary network has two types of branches –
♦ “ Thoroughfare” channels (=central channel), through which the blood flows uninterrupted. 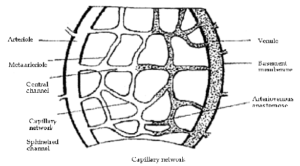 ♦ “Sphincters” channels, which have muscular precapillary sphincters at their origin. These are the blood to flow when needed.

The artery includes thick elastic walls and relatively narrow lumen.
Artery becomes empty after death. It has no value.
An artery is made up of
♦ Inner tunica intima (=interna)formed of elastic membrane and endothelium.
♦Middle tunica media formed of elastic connective tissue and formed circular smooth muscles.
♦Outer tunica adventitia (=externa)formed of connective tissue.
Vasa vasorum is a small blood vessel in tunica adventitia supplying blood to the same blood vessel.
Three types of arteries are known :
♦Small terminal arteries (=arterioles )
♦Medium -sized muscular arteries (= distribution arteries)
♦Larger elastic arteries (=conducting arteries)
Terminal arteries vary in diameter from 0.04mm to 0.3mm.
♦Thickness of their wall is more than the diameter of their lumen.
♦They regulate the distribution of blood.
Muscular arteries (such as radial, tibial, mesenteric, etc.)distribute blood to different organs. Their walls are thick because of the presence of a larger amount of muscles. Their diameter varies from 1 cm near their origin to 0.5mm near their leading to arterioles.
Elastic arteries (such as brachio-cephalic, common carotid etc.)are the largest arteries. Their tunica medium has fifty or more layers of elastic fibres.

They have thinner walls and larger lumina.
Capillary veins are venules (10-25 µm in diameter), which unite to form small veins unite to form medium-sized veins (1000mm in diameter), which drain into large veins.
♦ After death a vein retains blood.
Venules (= veinous capillaries)are of three types.
Post-capillary venules (10-25µm)receive blood from arterial capillaries and are lined by an endothelium sheathed by some loose pericytes.
Collecting veules (25-60 µm)have a continuous layer of pericytes around the endothelium.

Muscular venules (60-100µm) have 1-2 layers of smooth muscle cells in place of pericytes.