FLAGELLATION
♣ Depending upon the presence of absence, number and position, following types of flagellar arrangement are observed among bacteria:
♦ Atrichous: Flagella absent, e.g., Lactobacillus, Pasteurella.
♦ Monotrichous: A single flagellum present at one pole, e.g. Vibrio cholera, Thiobacillus.
♦ Cephalotrichous: A tuft of flagella at one end, e.g., Pseudomonas fluorescence.
♦ Amphitrichous: One flagellum at both ends, e.g. Nitrosomonas.
♦ Lophotrichous: Two tufts of flagella at both ends, e.g. Spirillum volutans.
♦ Peritrichous: A number of flagella borne all around the bacterium, e.g, Salmonella typhi. E. coli etc.

♣ Pili: These are hollow, non-helical, filamentous appendages projecting from the walls of some Gram () bacteria. These are thinner and shorter than the flagella. They are 1-4 in number and develop only on donor (or male) cells. They are made up of specific proteins called pilin. Pili help in the attachment of bacterial cells during conjugation.
Fimbriae
♣ They are small bristle-like fibres which develop from the surface of bacterial cells. They are quite numerous (300-400 cell). They take part in attachment, mutual aggregation or attachment to host tissue.
NUTRITION OF BACTERIA
♣ Bacteria show both autotrophic and heterotrophic nutrition. Autotrophic nutrition consists of the manufacture of organic materials from inorganic raw materials with the help of energy obtained sources. It is of two types chemosynthesis and photosynthesis.
Photoautotrophic Bacteria
♣ The bacteria possess photosynthesis pigments of two types, bacteriochlorophyll and bacteriopheophytin (chloronium chlorophyll). The two types fo pigments respectively occur in purple bacteria (e.g. Chlorobium limicola). The pigments occur in the membranes of thylakoids. No oxygen is evolved in bacterial photosynthesis. Such type of photosynthesis is known as anoxygenic photosynthesis. Water is not used as a source of reducing power. Instead, hydrogen is obtained either directly (some purple bacteria ) or from various types of inorganic and organic compounds, e.g.H2S, (green bacteria), aliphatic compounds (purple nonsulphur bacteria).

Chemoautotrophic Bacteria
♣ They are bacteria which are able to manufacture their organic food from inorganic raw materials with the help of energy derived from exergonic chemical reactions involving oxidation of an inorganic substance present in the external medium. There are several types of chemoautotrophic bacteria as:
1. Nitrifying bacteria –Nitrosomonas and Nitrosococcus obtain energy from oxidising ammonia to nitrite.

3. Iron bacteria – Ferrobacillus Ferro-oxidant obtains energy from oxidising ferrous compounds to ferric forms.
4. Other chemosynthetic bacteria – Bacterium Methanomonas oxidises methane into.
Carboxydomonas oxidises carbon monoxides to for obtaining energy
Heterotrophic nutrition involves three types – saprophytic, symbiotic and parasitic.
Saprophytic
♣ They are free-living bacteria which obtain their food from organic remains, e.g., corpses, animal excreta, fallen leaves, vegetables, fruits, meat, jams, jellies, bread and other products of plant and animal origin.
Symbiotic bacteria
♣ These bacteria live in mutually beneficial association with other organisms. The enteric bacterium Escherichia coli lives as a symbiont in the human intestine.
Parasitic bacteria
♣ The bacteria live in contact with other living beings for obtaining nourishment or special organic compounds required for growth (growth factors)
RESPIRATION
♣ According to the mode of respiration, bacteria can be aerobic or anaerobic. Each of them is further of two types, obligate and facultative.
♦ Obligate aerobes – They are bacteria which respire only aerobically. They generally get killed under anaerobic conditions, e.g., Bacillus subtilis.
♦ Facultative anaerobes – They are bacteria which generally respire aerobically but switch over to the anaerobic mode of respiration if oxygen becomes deficient.
♦ Obligate anaerobes – The bacteria in this category respire only anaerobically. They generally get killed under aerobic conditions, e.g., Clostridium botulinum.
♦ Facultative aerobes – They are bacteria which respire anaerobically under normal conditions but can respire aerobically when oxygen is available. Most of the photosynthetic bacteria belong to this group.
REPRODUCTION
♣ Bacteria reproduce mainly by vegetative and sexual methods of reproduction. However, they also exhibit some amount of genetic recombination.
Vegetative Reproduction
♣ It takes place by binary fission and budding.
Binary Fission:
♣ This is the universal method of multiplication in bacterial in which the cell divides into two equal parts by a transverse construction of the cytoplasm.
♣ Then nucleus divides as mitotically and the process of binary fission is completed in 20-30 minutes.
♣ Binary fission involves following steps:
♦ Replication of DNA
♦ Division of mesosome
♦ Membrane synthesis
♦ Cleavage
♦Septum formation
Budding:
♣ A protuberance develops at one end of the bacterial cell. Nuclear body replicates and one of them passes into the protuberance or but. The bud grows in size, constricts at the base and separates to form a new bacterium, e.g., Bifidobacterium.
♣ Spore formation: Bacteria produce several types of spores called conidia, sporangiospores. arthrospores (oidia), conidia, cysts and endospores. The process of sporulation occurs under unfavourable condition. Some rod-shaped bacteria like Bacillus and Clostridium form spores inside the vegetative cell called endospores. Cocci and spirilla bacteria do not produce endospores.
♣ Endospores are highly thick-walled and resistant spores which are formed in response to the adverse environment, the presence of harmful waste products, etc.
♣ The endospores may be spherical or oval in shape and are terminal, subterminal or central in position. It is covered by a thick wall made of 3-4 layers-exosporium (a loose lipo-protein covering), spore-coat (the actual outer impervious wall layer made up of keratin-like protein), cortex (the middle wall layer formed of peptidoglycan) and core-wall (the innermost wall layer formed of protein. The protoplasm of endospore contains nucleoid and cytoplasm having ribosomes, some RNAs and storage proteins Water content is low. Mainly cortex contains an anticoagulant dipicolinic acid stabilised by Ca++.
♣ This is mainly a source of perennation and dispersal and not a source of reproduction as one bacterial cell normally produces only a single endospore. It can easily tolerate a temperature of -100ªC to 100ªC Fortunately, only two of the pathogenic bacteria, namely Bacillus anthracis and Clostridium tetani produce endospores and cause anthrax and tetanus, respectively.
♣ Endospores show no detectable metabolism and can sunrise extreme physical and chemical stresses, such as high levels of UV- light, gamma radiation, detergents, disinfection, heat, pressure and desiccation. In this dormant state, these organisms may remain viable for millions of years, and endosperms even allow bacteria to sunrise exposures to the vacuum and radiation of space. 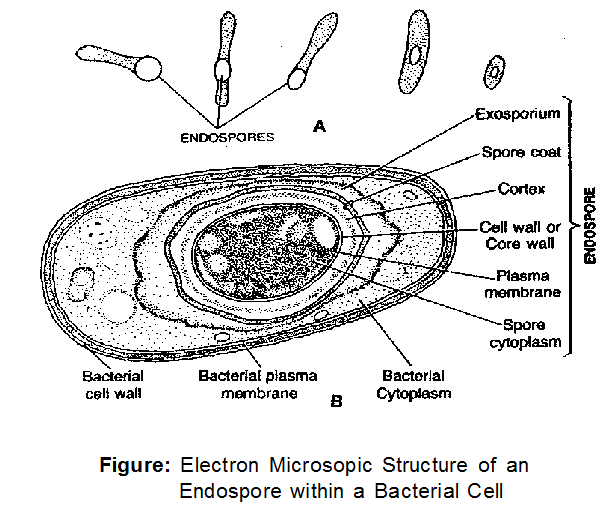