You may also Read

In this case, the three velocities with which we have to deal are:

From this equation, we can construct a velocity vector diagram, which would be very helpful in solving the question.

The velocity vector diagram for a particular situation is shown in figure. 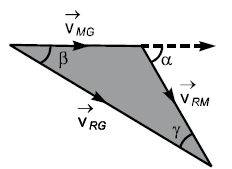 are not representing the length of triangles.

If in-air problems wind is blowing, then consider also the effect of wind blowing in the application.

In this case, we have to deal with the following velocities:

The velocity of swimmer/steamer/boat wrt ground.

For the situation shown in figure, a boat is crossing the river and it is heading (moving) along AP as shown, 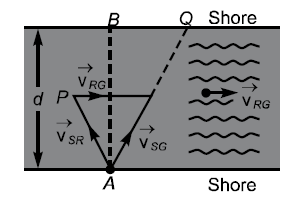 then the time taken by boat to cross the river is,

and it will reach point Q due to river flow

is termed as drift.

The velocity of plane wrt ground.

The relative motion equation would be

Here the following velocities are to be analyzed:

The velocity of plane wrt air.

The velocity of air wrt ground.

Conditions for Collision of Two Projectiles from Different Heights

Consider that two particles are projected from A and B with initial speed u1 and u2, respectively as shown in figure. 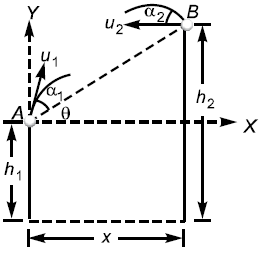 Let velocity of 1 wrt 2 is making an angle β with +ve X-axis,
then

Path of projectile as seen from another projectile

Consider two particles A and B projected from the same point with initial speed u1 and u2 respectively as shown in figure. 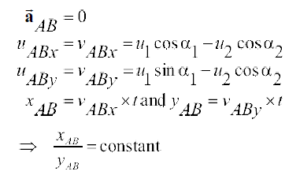 So, the motion of one projectile as seen from another projectile will be a straight line.

You may also Read